Written By: Ryan Lutz (and 2 other contributors) 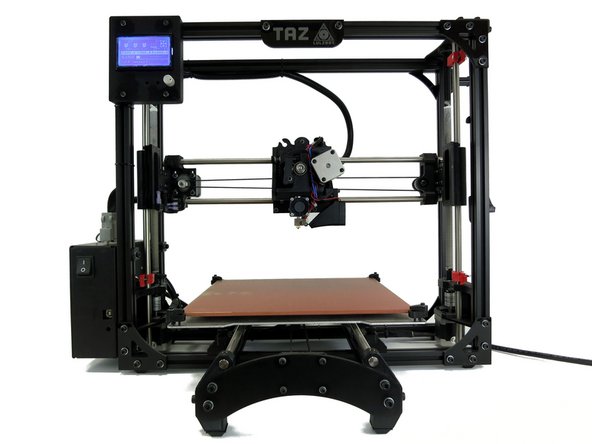 NOTE: This guide is applicable to most TAZ printers, but is specific to the TAZ 5 printers manufactured after July 2015. Versions prior to these had multiple smaller pin harnesses for connecting the hot end electronics, but the wires were all the same albeit in a different configuration.

One other person completed this guide.

I decided to buy a 5V 30x30mm fan to cool the cold end instead of the 12V fan provided with the E3D kit. This removes steps 18-25. The wiring/connectors for the 5V fan go where the blower connectors used to be. I can easily swap out the entire head and replace with my dual extruder when needed.

Thanks, Matthew; good catch! The link has been updated.

What's the advantage of 5V? I've seen RAMBo boards have trouble supplying enough power to heat sink fans and heat creep occurs, so I just wonder why you chose 5V instead of 12V.

Lulzbot decided to use 5V for their micro blower (why 5V and why a blower.. that CFM/pressure drop curve). If you have another Lulzbot toolhead you can keep the cold end voltage cooling mechanism consistent. There's certainly nothing wrong with the steps provided.

Ah yes, I forgot about the 5V micro-blower fan-- it's been a while since I tinkered with the TAZ. Thanks for your input!